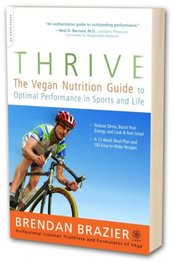 As we thrash through the ocean chop, hammer our bike cranks for hours on end, repeatedly pound our flesh on hot pavement, and hoist large amounts of weight overhead, do we actually need the meat, milk and eggs of animals to maintain and restore our amino acids, vitamins and minerals – or can we get all our performance and recovery needs from plants alone?

In my blog article “How To Be Extremely Active And Eat A Plant-Based Diet Without Destroying Your Body”, I dig into the omnivore vs. herbivore debate, lay out the argument of both sides and reveal the diet regimen of a variety of plant-based athletes from ultraman Rich Roll to aging endurance athlete Dr. Bill Misner.

But my purpose in this chapter of the book is not to argue for or against veganism, vegetarianism or some variation of a plant-based diet, since that can of worms could easily fill an entire book.Instead, I just want to ensure that you’ve got what you need to do things right and avoid body and brain damage if you decide you want to combine a plant-based diet with high amounts of physical activity.

This wouldn’t even be a topic in this book if it weren’t incredibly simple to setup a plant-based diet in a manner that creates gaping nutritional holes. Common mistakes found in athletes who make the switch include not eating a wide variety of colors in whole plant food, not eating enough calories, and not supplementing with vitamins, fatty acids, amino acids, minerals or micronutrients that are notoriously missing from a plant-based diet.

The fact is, it is very easy to eat poorly on a plant-based diet. You can gorge on ice cream, Twinkies, Taco Bell, Domino’s Pizza and McDonald’s milk shakes all day long and call yourself a vegetarian.  And vegans can stuff their faces with chemical-laden, processed meals like fast food french fries, potato chips, and “fake meat” products like veggie sausages, bacon & burgers all day long, and still technically be eating a “plant-based” diet. Granted, many of these same mistakes can also be made on an omnivore diet but it’s harder to create deficiencies when you’re including meat, fish and eggs compared to only plants.

The top 10 strategies you need to include if you decide to go plant-based are:


1.  Eat real food. Avoid plant-based Frankenfoods such as fake meats, textured vegetable proteins and processed soy products. Soy contains digestive irritants and digestive enzyme inhibitors such as lectins, phytates and protease inhibitors. Granted, most of these problematic compounds can be rendered mostly  harmless through fermenting soy and consuming it in forms such as miso, natto and tempeh – but you should avoid popular processed foods such as soy milk and tofu. Soy also contains high levels of goitrogens, which are compounds that inhibit the thyroid’s ability to utilize iodine correctly. This could lead to hypothyroid problems if you have a high soy consumption. Finally, soy contains plant estrogens in the form of isoflavones which can raise your estrogen levels and lower your testosterone levels (Barrett). So women with estrogen dominance or men and women with testosterone deficiencies shouldn’t be including soy in their diet.

3.  Supplement with vitamin K2. Vitamin K2 is critical for a healthy heart and skeletal system and is notoriously deficient in a plant-based diet (27). I highly recommend a vitamin K2 supplement at about 100mcg per day, along with generous amounts of natto (which incidentally goes well with avocado, sea salt and extra virgin olive oil for a nice breakfast).

4.  Supplement with Vitamin D3. If you want to keep your bones and teeth strong, and give yourself adequate hormone and steroid precursors, I recommend 35IU of Vitamin D3 per pound of body weight (8). This could be tough if you’re a strict vegan, because most supplemental vitamin D3 is derived from wool, and most vegan versions contain vitamin D2, which is a far less potent form. Garden of Life Vitamin D3 is one of the few vegan D3 brands out there.

7.  Maximize iron absorption. Non-heme iron is the form found in plant foods, and it’s less bioavailable than the heme iron in meat (21). But you can increase iron absorption from plant-based foods when you consume them in the presence of Vitamin C (similar to consuming beta-carotene rich foods with oily foods). Combined foods such as swiss chard, spinach, beet greens, lentils, beans, and quinoa with  foods high in Vitamin C like tomatoes, bell peppers, lemon juice, strawberries, oranges, papaya, kiwis, pineapple, or grapefruit. You should also moderate tea or coffee consumption, since these both reduce iron absorption.

8.  Use iodine. Plant-based diets are notoriously iodine deficient (25). Sea vegetables such as nori, kelp and dulse are the best natural sources of iodine. Check out the website Main Coast Sea Vegetables, where you’ll find many more iodine sources that you can easily read about or order. Also consider taking supplemental iodine, such as a daily dose ofliquid iodine, at about 6mg per day.

9.  Take vitamin B12. Nearly every study conducted on vegans showmuch higher rates of B12 deficiency than omnivores, with elevated homocysteine as a result (homocysteine increases blood clotting and raises your risk of heart disease) (2). I recommend a highly absorbable liposomal Vitamin B12, at about 10mcg per day.

10.  Supplement with taurine. Taurine is an amino acid found only in animal foods, and it is crucial for brain development, healthy blood pressure, blood glucose stability, fighting free radicals and protecting your vision (23). Your body can indeed make it’s own taurine from a combination of other amino acids, but this can be very hard for vegan athletes to pull off in adequate volume (20). There are vegan taurine sources out there such as NOW Foods Vegan Taurine Powder (trust me, it’s a much healthier alternative to Red Bull), and I recommend using 1 gram per day.

Those are the biggies.

If you want a little extra bang for your buck, my recommended performance-enhancing supplement stack for hard-charging vegan athletes also throws in 2-5 grams per day of Creatine, 250-500mg per day of L-Carnitine and 1-2 grams per day of Beta-Alanine.

So in addition to including the strategies above, what does “doing it right” actually look like when it comes down to brass tacks? Here are a couple real daily meal examples from successful endurance athletes…

Rich Roll, ultrarunner and author, who I interview in the podcast episode “Some Of The Craziest Superfoods You’ve Never Heard Of“:

Dr. Bill Misner, Ph.D. nutritionist, alternative medicine practitioner, and top Master’s runner who I interview in the podcast episodeEverything You Need To Know About How A Plant Based Diet Affects Your Performance:

Based on the success of plant-based endurance athletes like Rich Roll and Dr. Misner – and also Scott Jurek, Brendan Brazier, Hilary Biscay, and even UFC fighter James Wilks (who I interview in the episode “Training & Diet Secrets of a Vegan UFC Fighter”), it seems anecdotally possible to eat a plant-based diet right and avoid many of the potential deficiencies and health risks.

But I’m not personally taking any chances.

I do not eat a plant-based diet, nor do I endorse it.

As you learned in the previous chapter, I eat a high-fat diet, and this is incredibly difficult to maintain with plants only. Unlike the gut of a gorilla or a ruminant such as a cow, the human gut is simply not large enough to turn vegetable matters into fatty acids at an adequate rate for ideal metabolic and nervous system health.  This is one of the reasons why most traditional cultures consume some sort of animal food, such as bone broths, fish and shellfish, land and water fowl, land and sea mammals, eggs, milk and dairy products, reptiles, and even insects. In many cases, the whole animal is consumed, including muscle meat, organs, bones and fat (with the organ meats and fats preferred). And that’s just hard to replicate with kale and bananas, no matter how many vitamins and supplements you take.

Finally, the extremely low cholesterol levels that I’ve personally seen in the blood labs and biomarkers of plant-based athletes who I’ve advised gives me a bad feeling about potential for long term health risks, especially with regards to the brain and nervous system. As Primal Body, Primal Mind author Nora Gedgaudas discussed at my Become Superhuman event, those with cholesterol under 200 do more poorly on cognitive tests than those over 240, and this perhaps why vegetarians and vegans have been shown in studies to have the smallest brains – even less than those eating the SAD (Standard American Diet). Low cholesterol also increases overall risk of death, increases stroke risk, increases cancer risk, compromises immune function,increases depression, increases suicide risk, increases Alzheimer’s risk, increases Parkinson’s risk, increases kidney disease risk, andincreases sickle cell anemia risk. (13).

So in a nutshell, while I don’t personally advise a 100% plant-based diet (especially if you’re very physically active) you can at least mitigate the potential damage by utilizing the strategies you’ve just learned.